Pneuflex has distributors in 30+ countries and regions. What is the difference between BSPT, BSPP and NPT thread? 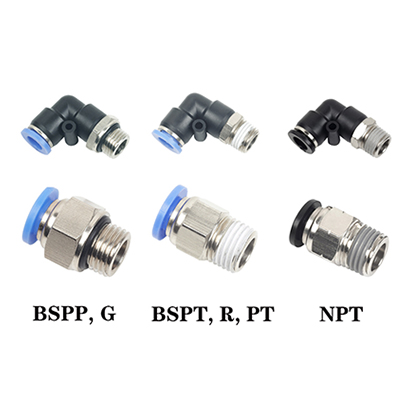 BSPT (British Standard Pipe Thread) thread push in fitting is popular type of seal in China and Japan. It is not commonly used in North America. BSPT is similar to NPT except the angle across the flanks of threads is 55 degrees instead of the 60 degrees in NPT.

BSPP (British Standard Parallel Pipe) thread pneumatic fitting is commonly used in the UK, Europe, Asia, Australia, New Zealand and South Africa. It is a parallel thread fitting that uses a seal ring for sealing. The seal ring is placed in-between a shoulder on the male fitting and the face of the female fitting and is squeezed in place.

NPT (National Pipe Thread) thread push to connect fitting is the most popular type of seal in the U.S. and Canada. NPT male adapters have a taper thread that wedges into the female NPT adapter. The angle across the flanks of threads is 60 degrees.